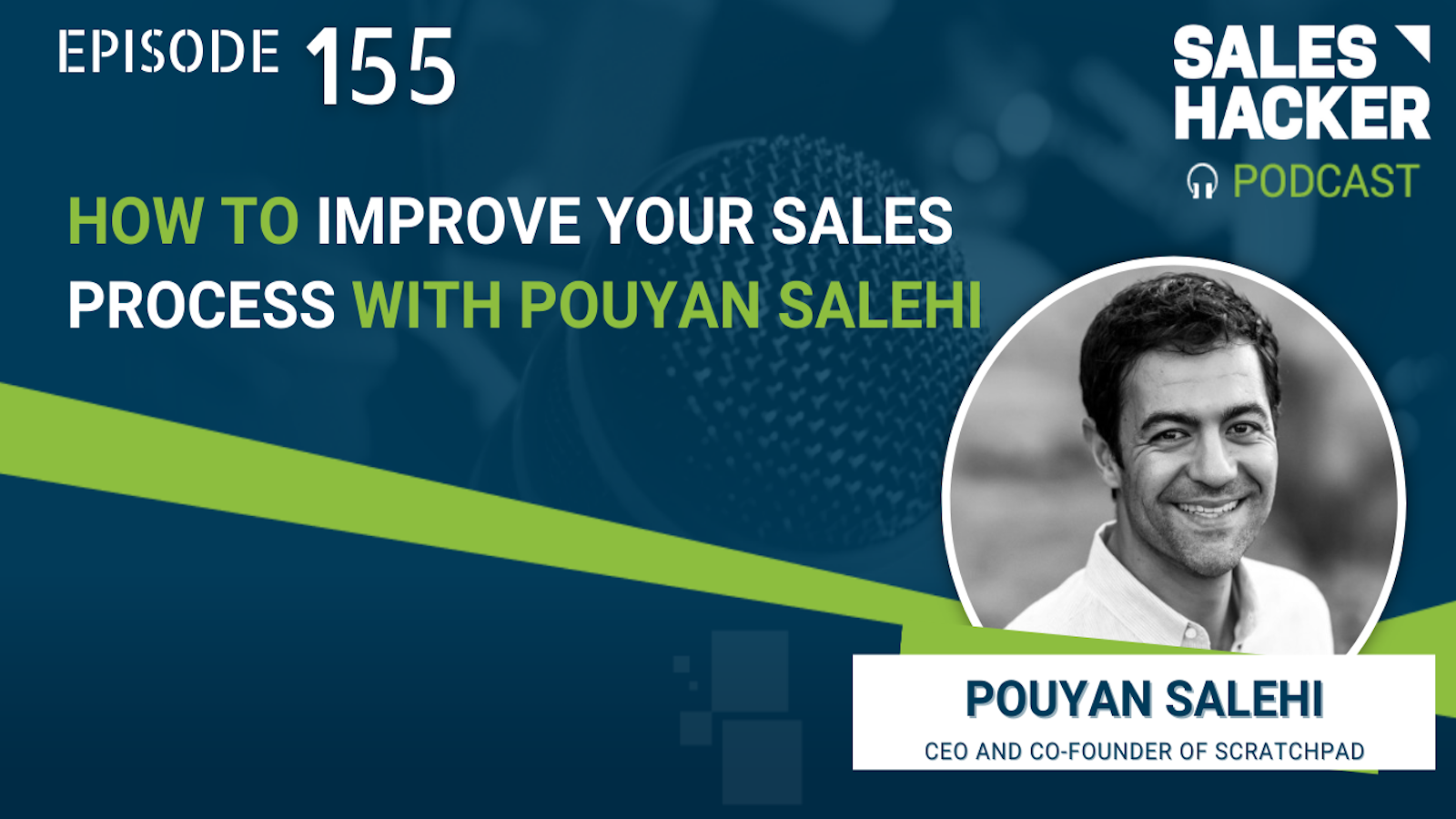 Sales Hacker: How to Improve Your Sales Process with Pouyan Salehi

Pouyan shares insights with Sam Jacobs of Sales Hacker for how sales organizations can drastically improve their sales process by making it easier and faster for reps to update Salesforce and manager their pipelines with Scratchpad.

Pouyan Salehi: I’m a first gen immigrant. My family came over from Iran when I was fairly young. My parents were both engineers in Iran, but when we came here to start a new life in the US, it was a typical immigrant story. They showed up with two suitcases, not much money. My dad specifically went from a very prominent well-known engineer to washing dishes in the back of an Irish restaurant for a while. And then he became a delivery driver for Domino’s pizza.

Putting away all of the ego and everything, just to say, “Hey, we want to start a new life and create something better for our family.” A lot of my inspiration is drawn from that experience. And it led to us actually owning a Domino’s pizza franchise.

I’ve probably been working since I was nine years old, and I joke that I learned more about product and business from running a pizza shop than I did at Harvard Business School, where I went for a master’s after engineering.

When somebody is ordering a pizza, they’re not just ordering food, they’re ordering convenience. It’s somebody that’s worked all day, just came home, doesn’t have time to cook dinner for the family. I’m drawing on a lot of those lessons in building Scratchpad and PersistIQ, but that was really the driver.

Sam Jacobs: So what did PersistIQ do? I think, if I’m not mistaken, that business was acquired, so hopefully a successful exit. But walk us through the journey there.

Pouyan Salehi: I’m glossing over a lot of the things we did at Lera Labs, because honestly, there are so many things that we built that never saw the light of day. But with each subsequent idea, I feel like we just got better and better at knowing what problem we were solving.

With PersistIQ, we were solving a very acute pain problem that we had. And that was, we had a product that we had built that was very similar to, I don’t know if you remember ClearSlide back in the day and all these docs. So we built something very similar to that because we saw it was valuable. You send a document out, no idea what would happen. We had that, but we didn’t have customers. So we were doing lots of outbound prospecting.

I had an Excel sheet probably with 2,500 names on there and I hacked mail. It was Thunderbird’s mail client. And there was this add-on you could do for mail merge. So I was manually doing a mail merge to 100 prospects a day, coming back the next day, keeping track of who responded, who didn’t submit a new 100. And it just blew my mind that there was nothing built for that job to be done.

We were like, “Gosh, this is a pain we know well, we know there are other people that are doing this job, why doesn’t anything exist?”

That was the inspiration for us to build PersistIQ.

Sam Jacobs: What was the culmination or the transition point where that reached a natural conclusion and you and your co-founder decided to work on Scratchpad and launch that?

Pouyan Salehi: I wish it were that clean — we woke up in the morning and had this flash of brilliance and then we knew what to do. It’s rarely ever that clean. It’s super messy. So the longest story with Persist, and I think is becoming more prevalent as more and more companies are started, is you find yourself in this messy middle.

We got to a million of revenue very quickly in a very capital-efficient way. And what happened was we were probably behind on timing just by a few months. It’s crazy that that’s what made it all the difference. The reality is the difference between a lot of these products is pretty minimal from the buyer’s perspective.

It felt like it was more of a marketing game at that point. Do we want to go that route and be a venture-funded business, raising lots of capital, go for the billion dollar plus valuation? And I think it just became very clear that that’s probably not the right path for us.

I think that was probably one of the hardest journeys that I had because you’re not the hot company and you’re not growing that quickly.

What kept us going though is, we felt like we had a great team. We knew how to build, and we just kept back to going to: What are other problems that we could solve that could be meaningful, that can have a meaningful impact on how people work?

Sam Jacobs: There are so many companies out there, so many amazing technical founders and people that are building great products. Your experience is, that’s not enough. Go-to-market excellence is sometimes even more important than the quality of the product. Maybe expand on that a little bit.

Pouyan Salehi: Building is almost emphasized too much as a founder skill set and selling go-to-market is not emphasized enough. We worked on our first product for a year, and you don’t get that time back. My belief now is try to actually sell before you build.

Any product that’s built now, instantly, you’re going to get different copies of it. So having alignment between your product, your go-to-market is so critical.

Sam Jacobs: What is the mom test? Is there a question that you ask about mothers or to a mother?

Pouyan Salehi: If I were to explain Scratchpad to my mom, could I do it in a way where it would land and it would resonate, or I would be able to get a signal from it?

I remember one of the earliest books I read was Question-Based Selling when I was trying to figure out how to sell. Somebody would pick the phone up and it was like verbal vomit. And I realized, no, I need to talk less. I need to ask more questions and let the prospect talk more.

Sam Jacobs: Hey, everybody. It’s Sam’s corner. Great conversation with Pouyan Salehi. A couple of things for me to take from that conversation. First, it’s still pretty damn cool when somebody comes and just builds a life. He and his parents came over here and they were engineers. They had to ditch that, and his father was a Domino’s delivery pizza driver. And then they eventually developed and acquired their own Domino’s franchise and became small business owners. The free flow of humanity and ideas and capital and innovation is hopefully what makes great systems thrive. And it’s wonderful to see that.

Second, we just have to give credit to Pouyan’s perseverance. He’s started a lot of different companies. He has not had a breakout IPO Slack/Salesforce/Clubhouse/Twitter level success yet. But you get the feeling that it’s just a matter of time because he is so focused on just continuing to try and build companies and build products that people love. Every failure sets the stage for the next great success.

Third, so many people build technology products without a great sense of how to take those products to market. Pouyan says, sell before you build, which is heresy in some corners of the world.

Within a few hours you’ll wonder how you ever closed a sale without it.

Add to ChromeGet it free
Chat with Us
Not using Chrome? Use the web app instead.